… and the winners are announced! The 2017 edition of the L’Oréal Colour Trophy has brought in a new name: Linton & Mac have scooped the top prize with their quirky, dark graphic cut and colour… we love its individuality. Bravo to the two ladies from Scotland. And a big hand for the runner up, London regional winner Grace Dalgleish at Brooks&Brooks who impressed with a sublime take on long, lustrous pink and lavender shades. Men’s Image award went to Ky Wilson at The Social for a bang-on-trend textured look – nice indeed – with Harriet Stokes at Not Another Salon taking the Star award (for aspiring colourists) and Nashwhite collecting the Afro Look award.
On from the competition, the evening’s shows were a treat we adored. We’ve seen many LCT presentations and this year’s opening show, Expression of Colour Collective – bringing together six of the most talented female colourists in the UK – was a stunner. To win our hearts further, the Toni&Guy International Artistic Team blew us away with ‘Elements’ – a display of avantgarde styling prowess and stage presence that reminds us how Sacha Mascolo, Indira Schauwecker, and Cos Sakkas still head up a creative team of phenomenal taste and talent. What at night #tributeloves
Browse the pictures, then read the winning list below… 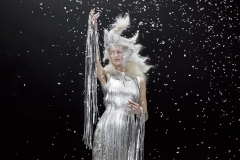 The L’Oréal Professionnel STAR Award winner was Harriet Stokes from Not Another Salon, London.
The Afro Look Award to Nashwhite, Leamington Spa.
The Men’s Image Award to Ky Wilson at The Social, London.

BACK TO MAIN PAGE